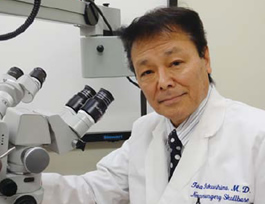 Takanori Fukushima, M.D., D.M.Sc., received his postgraduate training in neurosurgery at the University of Tokyo Hospital, the Free University of Berlin, and the Mayo Clinic and Mayo Graduate School of Medicine in Rochester, Minnesota.

Dr. Fukushima is internationally renowned for his research and clinical work in the treatment of skull base tumors, aneurysms, hemifacial spasm, trigeminal neuralgia and arteriovenous malformations of the brain, as well as pituitary disorders.

As an innovator, Dr. Fukushima has few peers. A pioneer in the 1960s of minimally invasive approaches in neurosurgery, he established a technique called keyhole craniotomy for endoscopic brain tumor removal. Since then he has employed keyhole surgery in more than 5,500 cases to treat hemifacial spasm, trigeminal neuralgia, and glossopharyngeal neuralgia. He developed the first flexible neuroendoscope, several microsurgical instruments and an eponymous technique for skull base carotid bypass surgery.